What Can We Do If MP4 Cannot Play on Mac

We spin around different memories in a day, which constitutes videos as well as photos. It becomes quite stressful if some of the videos stop working. If you use Mac, you can relate, as the MP4 video format ceases to play at times.

However, you don't need to worry as we have got you all covered. The different parts of this article are guaranteed to answer most of your questions and offer workable solutions to eliminate the problem. Hence, without any further delay, lets us get onto it!

Part 1: Why Is MP4 Not Available to Play on Mac?

Any error can occur in the video file format that does not allow the video to play. If you are having this problem with Mac, then you are in the right place. First, we will make sure that you have a clear knowledge of the causes of the problem.

The major cause of the MP4 video file not working on Mac is the corrupted MP4 file. Several reasons are attached to it, such as virus threats, inaccurate video conversion, recovery, etc.

Another cause closely linked to this problem is the corrupted video player. When you are playing the video in MP4 format with the corrupted player or has some issues with the software, then forget about the video's normal functioning.

Most times, it happens that the MP4 video file does not have the right codec. This leads to the video file unable to play on Mac.

If your internet connection is shared with several devices, then the network becomes unstable and can cause the mp4 video file format to not play on Mac.

As mentioned in part 1 above, there can be several reasons for Mac users facing this problem. However, for your assistance, we have devised three solutions that are guaranteed to work in the long run and will get you off the hook. So why the delay? Let us start!

The first solution carved out for you is the Wondershare Online Repairit Tool. If you are willing to solve this problem in seconds, this has to be the right choice. Follow the steps keenly to get favorable results.

First, launch the software. As you open it, you will find a large (+) sign in the beginning. Just tap it and insert the corrupted video that needs to be fixed. After you have provided the video to the software, it will start to upload. 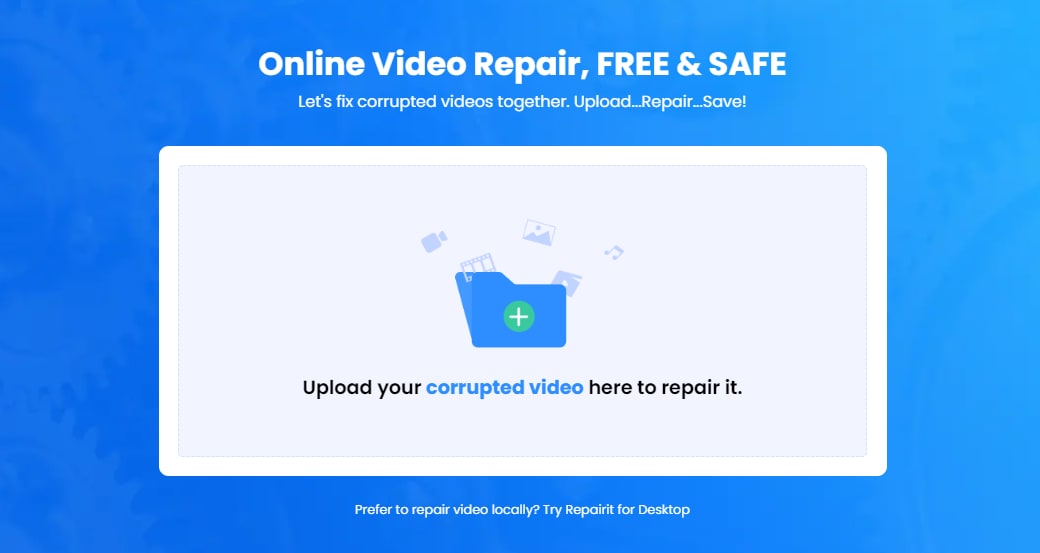 The plus point of using the online version is that it instantly initiates the repair process as soon as the video is uploaded.

Here comes the last step. After a couple of minutes, the video gets repaired and is previewed on the software. You can save it and repair the next video on the same page as well. 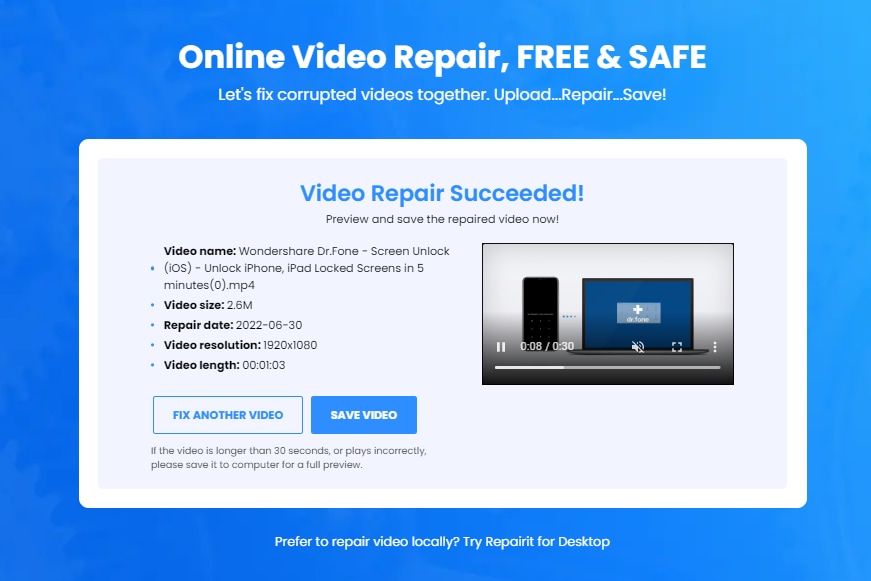 The second solution for your rescue. Allow me to present you with Wondershare Repairit for Desktop Version that ensures its expertise in solving problems of the same nature. Therefore, without wasting any time, let us look at the guidelines sketched out for you.

The first step is where you are supposed to insert the corrupted video so that the software starts working on it. What do you do? Just find the (+) sign in the center of the page. Tap on it and add the video from your Mac. 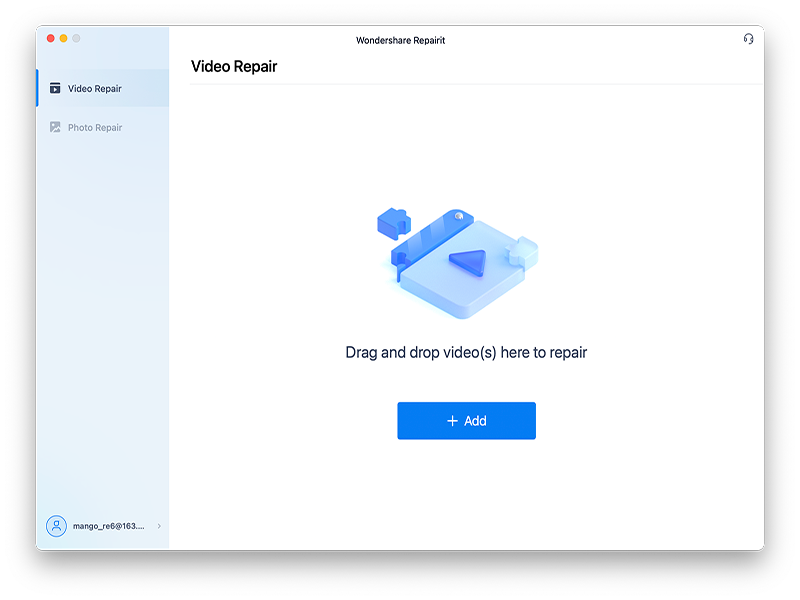 After you have selected the video to be repaired, it will appear on the software's page. From there, click on the "Repair" option located on the bottom right corner of the screen. This will initiate the repair process without any delay. 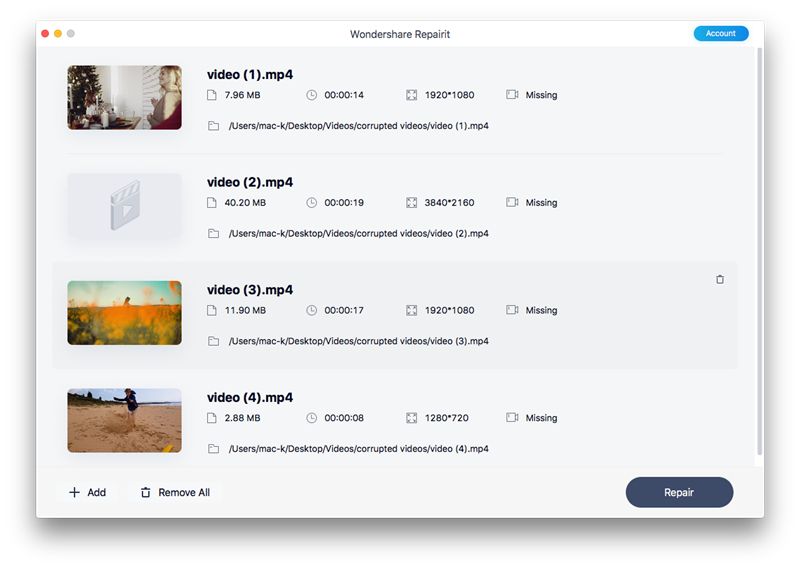 Due to any reason, your video may remain deprived of getting repaired. There is no need to panic as Wondershare Repairit comes with an Advanced Repair System. How does it work? You are supposed to add the sample video, which is in the same format as the corrupted video. After this, the video will get repaired in no time. 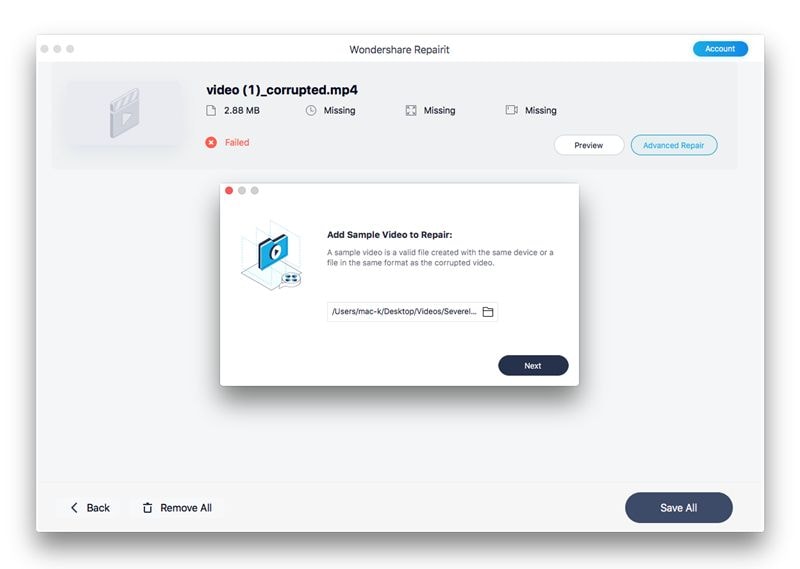 After some time, the video is repaired and displayed on the screen. You can have a look at it and then save it to somewhere safe in your system.

To the Mac users' shock, media players also offer the fixing of MP4 video files and make our life bearable. In this solution, we will be discussing two media players. VLC and Quick Time media player and how they repair the corrupted MP4 video file format. Let us have a look at each of them.

It feels quite odd to know that a media player can repair the mp4 video file. But do not be shocked as in the following steps you will be sure of its workability.

1. First things first, you are supposed to open the VLC media player application.

2. Click on the "Tools" button, which you will find in the top bar. 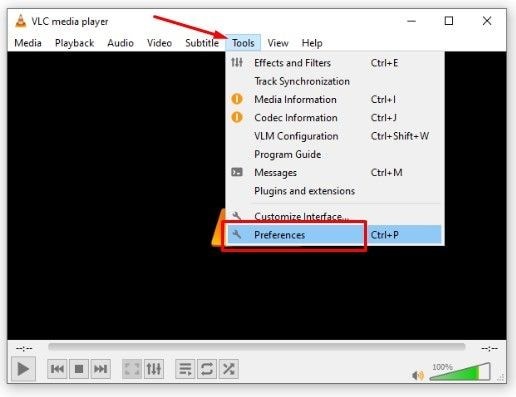 4. A window pop-up will appear. Click on “Input/Codecs” option. After that, you are supposed to tap on "All" in settings. 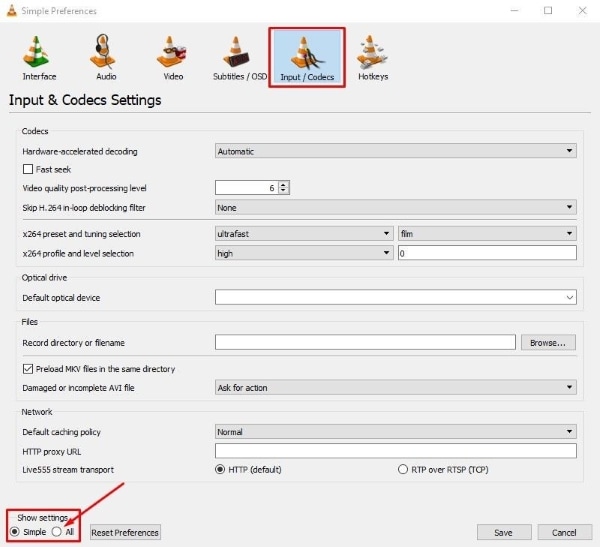 5. Now, expand the "Input Codecs." From the expanded menus, tap on "Video Codecs." And in the end, select the "FFmpeg" option.

6. From there comes a list of menus where you are supposed to disable "Hardware Decoding." 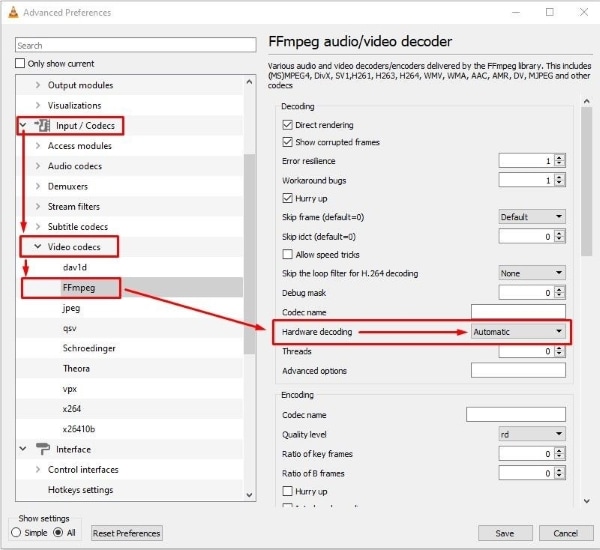 7. Now, check the video and preview it as it will be free of corruption and good to go.

Following are two guidelines for using this media player to fix your mp4 video file not playing on Mac problem.

1. Quick Time 7 Pro. If you install Quick Time 7 Pro on your Mac, it will work for the MP4 video files. Why? This player has the honor of handling the said format effectively and, therefore, has to be your first choice if you encounter such a problem.

Part 3. Are There Any Good Tips to Protect MP4 Video Files?

MP4 video files can undergo damage or corruption at any time, and, repairing them is not that hard; however, a precaution is better than a cure. We should perform certain efforts to protect those MP4 video files and avoid any future inconvenience.

Following are some tips set up for you to protect the video files. Let us have a look.

If you are sure that these tips are being practiced, trust me, your MP4 video files are protected, and they will never be corrupted. It is suggested that we take care of our memories just like we take care of us as they are an essential part of our life.

Hop on to the next section to see the comparison of MP4 video file formats with MOV, FLV, and AVI.

Part 4. Why MP4 Is the Most Popular Video Format?

With the market teeming with several video formats, it is important to find the best one that suits the media player's codec and system. MP4 video format is considered the best format that exists there. Why? Let us have a look at the answer.

MP4 video format shows extreme compatibility with Apple products making it very popular among the iTunes store. It works great with several media players like VLC, GOM, and Windows Media Player, making it the best out there. Moreover, this file format works like a charm during the streaming of videos on the internet. Apart from all this, MP4 also leaves its magic in 3D presentations. Thrilling, isn't it? In this section, we will be comparing different video formats with MP4 that will allow the user to make a clear decision.

The MP4 format was developed before MOV and considered as its descendant. With the same nature of MPEG-4 format, it can be utilized by both MOV and MP4 video files. The MOV file format was first dedicated to being used by Quick Time media player only. However, both of these formats can be converted into one another.

One of the reasons for using the MOV video file format is that it brings simplicity to the table for beginners to edit their videos. It has the ability to work great with Apple devices. However, MP4 has the honor of offering compatibility with a great range of devices. It is smaller in size, can be downloaded easily, and takes less battery as compared to MOV.

FLV works like magic during the streaming of videos online and offers a small size. This small size makes the video download easy, making it famous among several browsers and media players. FLV is usually used by Adobe Flash Player.

But unlike MP4, FLV does not offer compatibility to a wide range of devices, including iOS and other smartphones. This has reduced its popularity. Moreover, the MP4 video file format offers smoothness in video playback, which FLV clearly cannot. It also uses less battery making it the best of all.

AVI video file format is considered one of the oldest formats to date, which provided it with the honor of being the default format of most media players and systems. It offers high-quality video making is famous among web browsers.

However, in comparison to MP4, AVI loses the battle. With a wide range of compatible media players and phone devices, MP4 takes the round. AVI format brings large files that take time to be downloaded, takes space, and does not offer variety with respect to the devices and video players.

The article reflects the reasons for MP4 video files ceasing to play on Mac and provides reasonable solutions to get the user out of this fix.

Moreover, we have made sure that by the end of this article, Mac users can repair their corrupted video files and perform certain steps to protect them from getting corrupted. The readers can also find the comparison between different formats to MP4 to decide fairly and logically.