Whether you are unable to play a video recorded on your phone or you have lost a broken file MP4Fix video repair tool can easily repair your corrupted mp4 videos and save you from tension within a few minutes. It is an all-rounder tool to fix corrupted mp4 videos on any Android phone.

MP4 is a multimedia file generally used to store a movie or video clip. It is a common file format for streaming and downloading videos from the internet. MP4Fix video repair is a powerful tool and easy to use app which can repair corrupted mp4 videos.

MP4Fix video repair tool has the following features and functions:

If the camera app crashed while you were recording the video and you get a message "Unfortunately, Camera has stopped". Don't get disappointed if the saved video can't be played because the MP4Fix video repair tool can resolve this issue.

While you were recording the video you get a system notification "Storage space running out" and now you are unable to play the recorded file because it wasn't saved completely. Don't worry MP4Fix video repair tool can be used to repair this video.

If your video doesn't work because your phone turned off while you couldn't save the recorded video then the MP4Fix video repair tool can solve your problem easily.

The following are the advantages of using this app:

It is easy to use due to its friendly user interface, you can restore your android videos easily and smoothly.

MP4Fix video repair is the only tool that allows recovering corrupted recordings in mp4 format on Google Play Store.

It is very reliable because with MP4Fix video repair you can easily recover all available data.

It is very affordable as you can watch repaired videos on MP4Fix video repair for free and share them with your family and friends for a small one-time fee.

MP4Fix video repair can't fix videos downloaded from the internet because they use a codec not supported by android and may get corrupted because of network connection.

MP4Fix video repair tool is only compatible with android and doesn't work on other operating systems.

Grigory Goncharov Vogman gave a 5-star rating and reviewed MP4Fix on Google play store to be a great app. I was recording a video of my child's concert when the phone (Pixel 3a) stopped recording due to "running out of space" with NO FREAKING WARNING... I was very sad... But thanks to the developer of this app I was able to restore the file (at least that part that was saved on the phone). The price is more than reasonable, given other similar programs (a similar program that I installed on a PC wanted $50 (!) for the very basic license). And! I didn't even have to do anything (literally) I opened the app, it found the corrupt file on its own, found (i guess) the reference file, and fixed the corrupt file in a matter of minute(s). Great job and thank you!

Miljenko Pretkovic reviewed MP4Fix on Google play store with a five-star rating as my phone turned off due to low battery the only moment after I've finished recording a short video. The file was corrupted and this app repaired it successfully. The repaired video is available for free only for preview. The app must be purchased for the video to be saved, shared, or played in original resolution.

Robbie Dow gave the following review on Google play store as it fixed my videos, so I'm happy. Works fast. Bummed it's not free if u wanna save them, but honestly, it's fair considering they give u the preview so u can see that it works. Thought my videos were gone forever!

Monique Lamoureux gave it a 2-star rating and gave the following review on Google play store can't believe this app recovered my video! That's awesome. However, it's listed as a free app and then if you want to save your fixed video they want to charge almost $8. Just tell people that right off the bat... I hate when apps try to 'trick you' into buying their product. Not cool.

Vitale gave a 1-star review on Google play store and stated maybe works, maybe not, you have to purchase the pro version just to check and realize that it did not help. The free app preview does not show the video so it's useless.

How to Fix Corrupted MP4 Files with MP4Fix

Open the app and select any of the broken videos from the list. 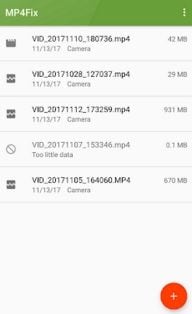 MP4Fix video repair uses a correct video to repair the broken video recorded on the same device by using the same camera app. 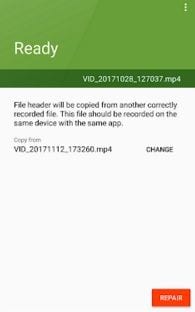 Select the Repair option to start the process. Wait for a few minutes. 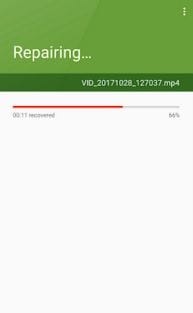 Step 4: Preview or save

You will be notified after the repair is complete. Preview the repaired file or save it by taping either of these options. 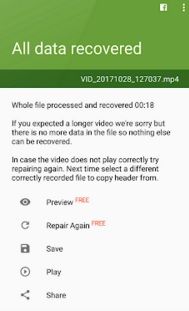 Other solutions to fix mp4 files

By using the following solutions you can easily fix any mp4 file:

It supports the repairing of major video file formats such as FLV, AVI, 3GP, MOV, MP4, M4V, M2TS, MKV, AND MTS and is compatible with both Windows and Mac.

Open the app and upload single or multiple corrupted mp4 video files by clicking the Add or Add video and start repairing button. You can also drag the files or simply open them. 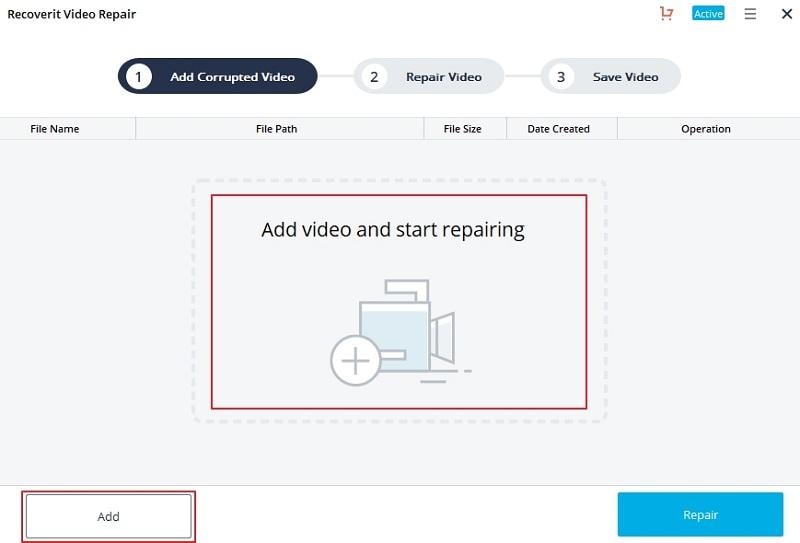 Click the Repair button to start the repairing process of corrupted mp4 videos. 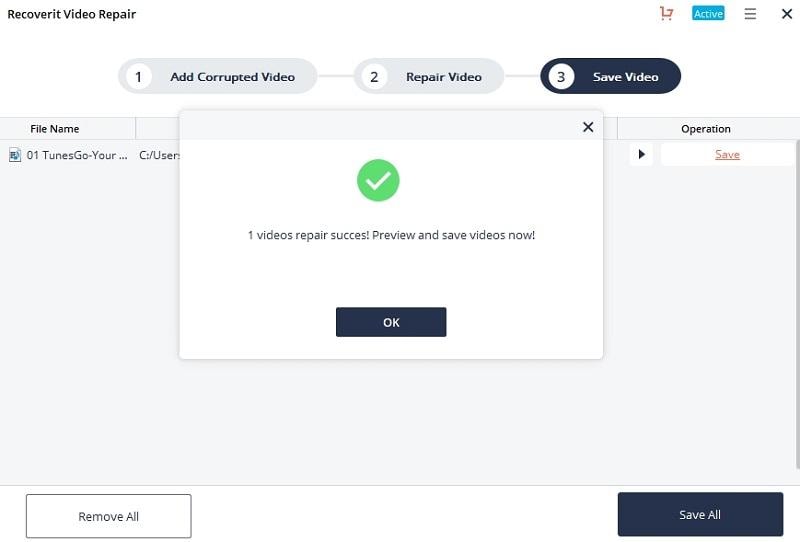 After waiting for a few minutes you can see the repaired mp4 file and check it's quality by previewing the video. 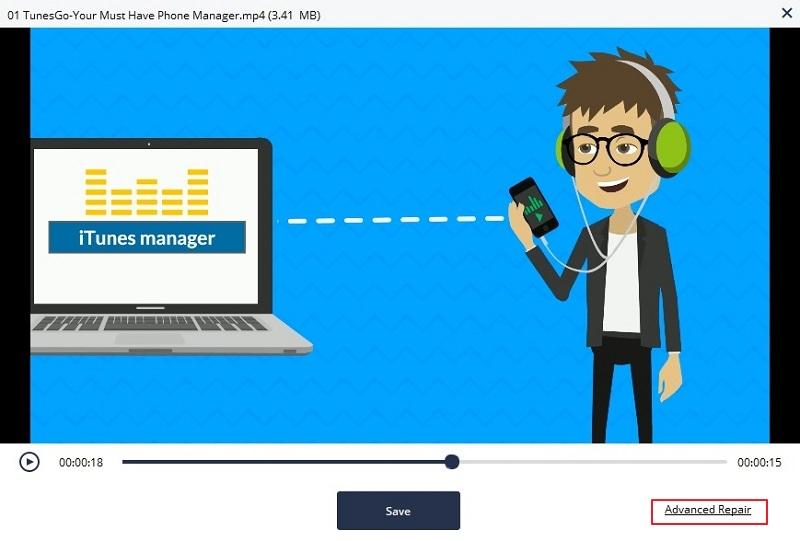 Step 4: If video is still unrepaired use Advanced repair

If the video is still unrepaired and corrupted use the Advanced repair option by uploading a sample video. The sample video should be from the same device and gave the same format as the corrupted video. 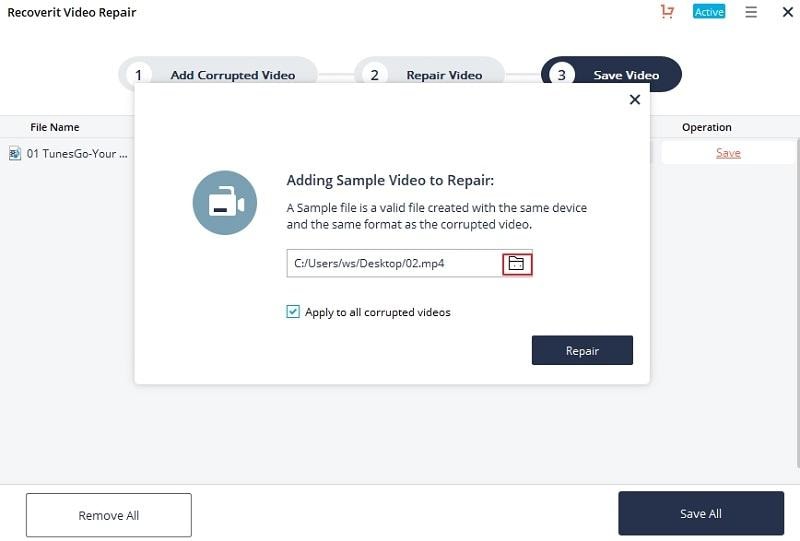 Click the Save button to export the repaired mp4 video files to the desired destination. 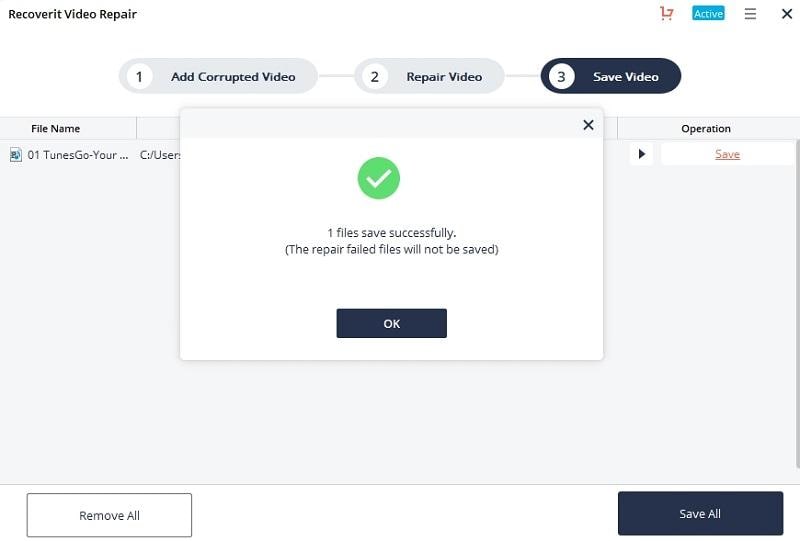 Video Tutorial on How to Repair Corrupted MP4 Video Files

Use a VLC media player to play corrupt mp4 videos

Use a VLC media player to fix corrupt mp4 videos

VLC is a global free media player and is a perfect tool when it comes to the repair of damaged files belonging to the MP4, AVI, MOV, or QTRM formats.

If you are unable to play your mp4 file with the above method try fixing it by these steps:

Step 1. Right-click on the corrupted mp4 file and select the Rename option. 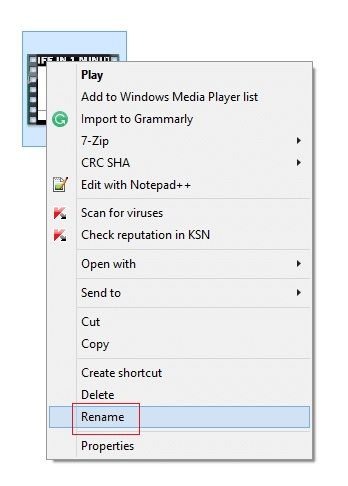 Step 2. Press Enter and change the file format to .avi. 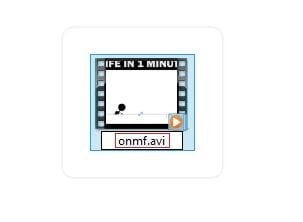 Step 3. Open the VLC media player and click on the Tools menu. From the drop-down menu, select Preferences 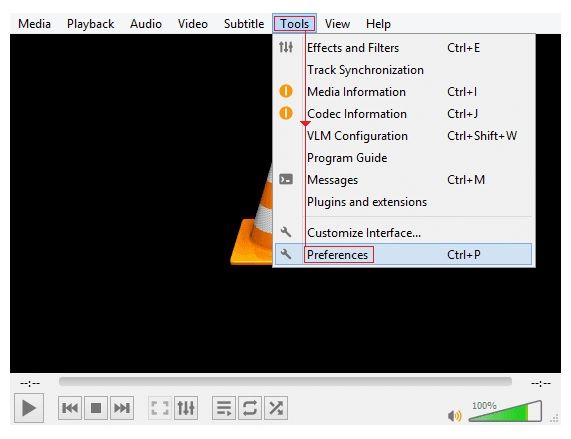 Step 4.Select the Input/Codec option and a window will open.

Step 5. Under the file section in Damaged or incomplete, AVI file option select Always fix. Click the Save option 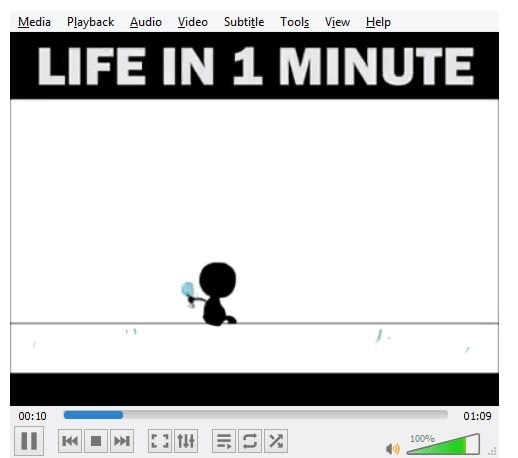 Use Get My Videos Back

This app can easily repair and recover videos of various codecs such as MP4, AVI, 3GP, MPEG, and more. 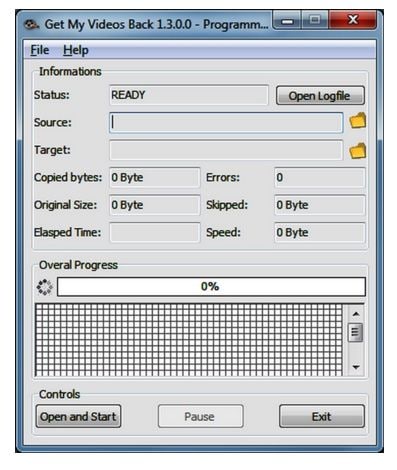 Use an Expert Tool

If you are tired after trying all the above workarounds and nothing worked for you then you can try using a convenient and user-friendly Wondershare Video Repair tool to fix your mp4 video files.

Mp4 is a digital multimedia container that is widely used to store audio and videos in the MPEG-4 format. Mp4 is a compressed file format that contains subtitles, images, audio, and video. For streaming and downloading videos from the internet mp4 file format is commonly used. Mp4 format is supported by many hardware devices and video programs. It is supported on Windows, Mac, Android, Linux, and iOS. Mp4 files can become corrupted due to the following reasons:

How to prevent mp4 video files from corruption

You can minimize the chances to corrupt your mp4 video files by following these simple and easy tips:

Mp4 files can become unplayable and corrupted due to several reasons. In this step by step guide, you can find several effective solutions to repair corrupted mp4 video files but Wondershare video repair is the most outstanding choice.