How to Play AVI Files and Repair Corrupted Videos on Mac

AVI (Audio Video Interleave) is a common video format that is used to store short videos on different storage devices. Since AVI uses a lower compression as compared to other video formats, it’s easier to store and share short videos.

The format is also compatible with the majority of media players, which means users can easily play AVI videos on any device they want.

However, it’s also no secret that AVI files are prone to unexpected errors that might damage the overall user experience and restrict users from playing the videos. This generally happens due to file corruption.

Let’s say you have downloaded the AVI file from the Internet and due to a network error, it didn’t download properly. In this situation, no media player will play AVI on Mac and things will become pretty annoying for sure. 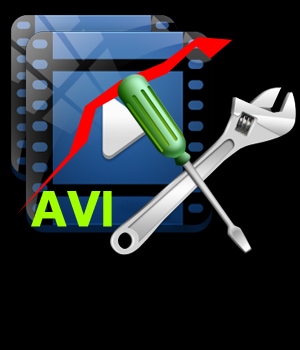 In this article, we’ll walk you through different solutions to repair an AVI file and play it on your system without encountering any unexpected errors.

So, without any further ado, let’s get started.

01 Part 1: Abstract of AVI Files
02 Part 2: Why AVI files Cannot Be Played on Mac and How to Handle?
03 Part 3:  Workarounds to Fix Corrupt or Non-playing AVI videos

Now, before proceeding any further, let’s first understand what AVI file format is and why it’s used? AVI stands for Audio Video Interleave - a popular file format that’s used to store videos (along with their audio files). The format is designed by Microsoft and was first released in 1992.

For nearly three decades, AVI has continued to be a reliable file format that’s commonly used to store and share short videos. The reason being AVI can store both audio and video data, which means it can offer simultaneous audio-video playback with no lags at all.

Part 2:    Why AVI files Cannot Be Played on Mac and How to Handle?

So, what might restrict you from playing AVI files on Mac. As we mentioned earlier, corrupt AVI files are the most common reason why users may struggle to play AVI files on their Macbooks. Different factors can corrupt an AVI file, including: 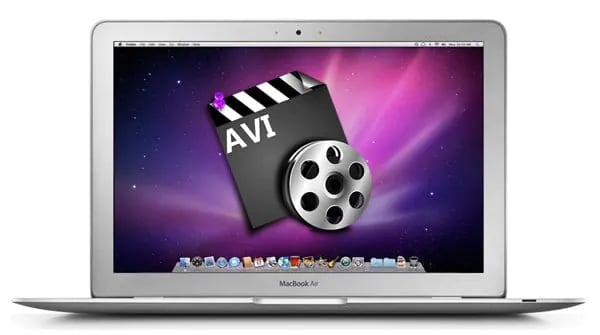 In addition to filing corruption, missing codecs are another reason you might not be able to play AVI on Mac. QuickTime, the official media player on macOS, doesn’t support AVI file format by default. If you want to play AVI files on a Macbook, you’ll have to first download the required codecs from the Internet.

So, before diving into the advanced solutions, make sure that the compatible codecs are installed to play AVI files on your Mac. If the issue still persists, however, implement the following solutions to repair the corrupt AVI files and play them without any interruption.

One of the easiest ways to repair a corrupt AVI file, especially when you don’t know the root cause of the problem, is to use a professional video repair software like Wondershare Repairit. The tool will automatically diagnose the problem, detect the error, and repair the file with a single click.

It doesn’t matter if the AVI file is dealing with a logical error or if it has broken codecs, Repairit will repair the file and you’ll be able to play it within a few minutes. It also has a dedicated “Advanced Repair” mode that’s specifically integrated to repair severely corrupt videos.

Apart from videos, Wondershare Repairit also supports photo repair functionality. It means you can also use the tool to repair severely damaged pictures.

The best part is Wondershare Repairit comes with an easy-to-use interface, which means anyone can use it to repair corrupt videos and play AVI on Mac. It offers a simple 3-step process to repair all types of videos instantly.

So, here’s the step-by-step process to repair an AVI file on Mac using Wondershare Repairit.

Step 1 - First of all, go to Repairit’s official website and download the application on your Mac. Then, launch the installer and follow the on-screen instructions to launch the tool to get started.

Step 2 - Now, click the “Add Video” button and select the video files that you want to repair from the prompted “File Explorer” window. Since the tool also supports batch processing, you can even add multiple files at the same time.

Step 3 - Wait for the videos to get loaded in Repairit’s timeline. Once all the videos are loaded, click the “Repair” button at the bottom-right corner.

Repairit will start repairing the selected videos. And, once the process completes, you’ll see a confirmation message on your screen.

Step 4 - Click the “Preview” button to check if the video is playing properly or not. In the end, click “Save” to save the repaired file on your system.

That’s it; the AVI files will now be repaired and you’ll be able to play them on your Mac without running into unexpected errors.

So that was the first method to repair corrupted AVI. Now, let’s move to the next one and see if that works for you.

Even though VLC is a dedicated media player, it also comes with a built-in video repair feature that can fix minor bugs with different video files.

Usually, you would want to use the VLC media player when the video is either freezing or stuttering too frequently. This is a clear indication of errors with the index file and VLC is the most reliable tool to repair these indexes.

Follow these steps to repair AVI files on a Mac using the VLC media player.

Step 1 - Start by launching the VLC media player on your system. Then, click “Tools” in the top menu bar and select “Effects and Filters” from the drop-down menu. 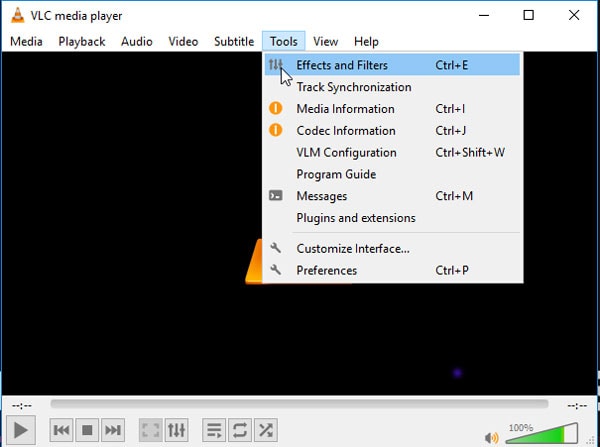 Step 2 - Click on “Preferences” and then switch to the “Input/Codecs” tab in the Preferences window.

Step 3 - Now, locate the “Damaged or Incomplete AVI file” and change its setting to “Always Fix” using the drop-down menu. From now on, the VLC media player will automatically run a diagnosis every time you play an AVI file and repair the ones that are corrupted. 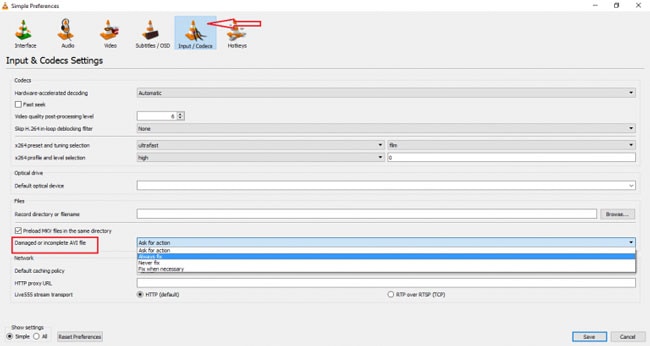 Step 4 - Finally, play the video that you want to repair using a VLC media player and wait for a few seconds to get it repaired.

Another way to repair corrupt AVI files is to use FFMPEG. For people who don’t know, FFMPEG is a command-line multimedia platform that’s designed to manipulate, edit, convert, and even repair video files through commands.

Ideally, content creators and large media houses use FFMPEG during the post-production phase. However, even individual users can also install and run FFMPEG on their systems and use it to perform a wide variety of video-related operations.

The only downside of using FFMPEG is that the process is quite complicated, especially if you haven’t worked with a command-line interface in the past.

Not to mention, you must also be familiar with the correct commands to repair the video. So, in case you are not a tech-geek and don’t want to get involved in unnecessary chaos, it would be better to stick to the previous two solutions.

Here’s how you can use FFMPEG to repair an AVI file. To do this, however, you’ll have to bring your Windows laptop.

Step 1 - First of all, download and install FFMPEG on your system.

Step 2 - Make sure that the video that you want to repair is stored on the desktop.

Step 3 - Now, press “Windows+R” and type CMD in the search bar to open a command prompt.

Step 5 - Type the following command and then press enter.

Make sure to replace “input” with the file name of the AVI video that you want to repair.

Once the process completes, you’ll be able to play the corrupt video without any interruption.

AVI is a popular file format that has been a part of the media industry since 1992. Despite its immense popularity, however, even AVI files can run into different unexpected errors and restrict users from enjoying their entertainment sessions.

If you are also stuck in a similar situation, don’t panic and use the above-mentioned solutions to repair AVI files on Mac and play them without getting interrupted whatsoever. And, in case you don’t know what’s causing the problem, simply install Wondershare Repairit on your Mac and use it to repair the corrupt AVI files. 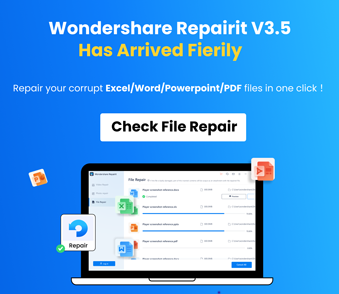